Day trip to Girona, the medieval gem of Catalonia

If Barcelona is known for being a city hugely rich in architecture, gastronomy and history, Girona, just 100 kilometers away from the city of Barcelona, has nothing to envy. Girona, homeland of Salvador Dalí among many other famous artists, overflows culture and heritage throughout its whole province.

Today, from Hostemplo, we bring you a one-day excursion to Girona city so that you can dive into its medieval treasures, walk through its walls or taste its renowned gastronomy.

The capital of Girona is located in a privileged spot, between the Pyrenees and the Costa Brava, in the valley of Ter, one of the four rivers that converge in the city. For this reason it is also known as the “City of the Four Rivers”.

THE FORÇA VELLA: A FUSION OF CULTURES 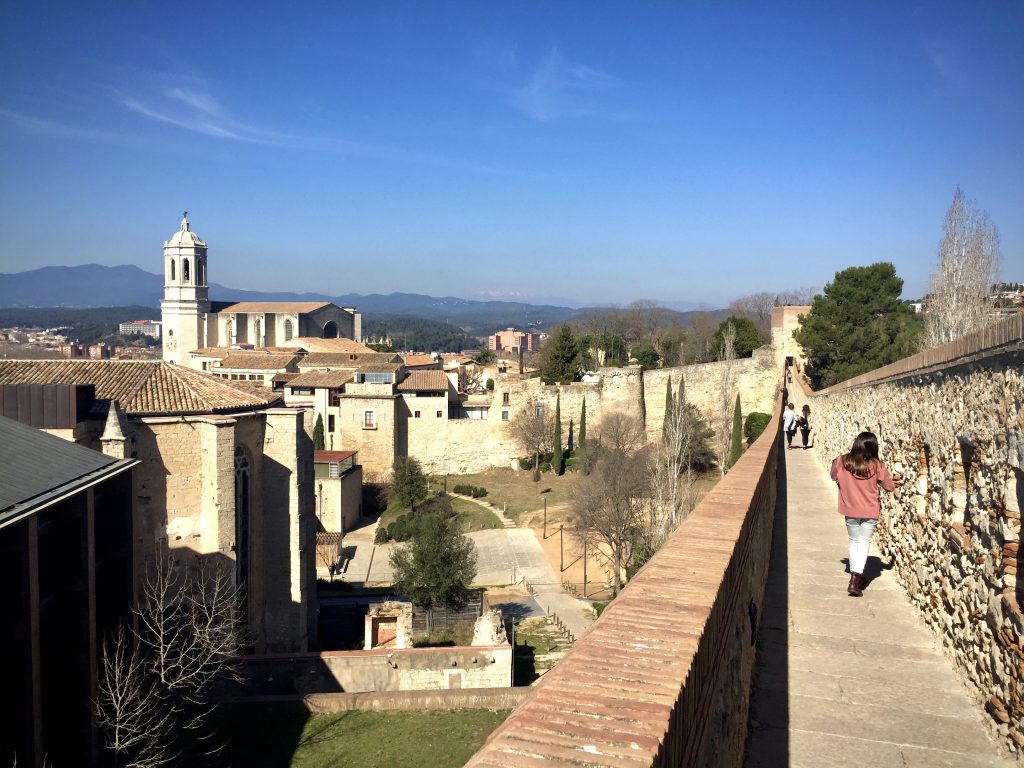 We begin our tour at the historic center, where Roman, Arab and Hebrew reminiscences coexist with the dominant medieval buildings.

The heart of the city is walled by the Força Vella, where we find the most representative monuments of its 22 centuries of history since the Romans founded it in the 1st century BC and built the ancient wall of which remains are still preserved today. Its triangular perimeter formed a kind of acropolis that remained protected by solid stone walls.

Thanks to the extension of the Roman walls in medieval times we can now walk along the old “Camino de Ronda” (round road) and walk through the largest Carolingian wall in Europe (s. IX). Its towers have become authentic privileged viewpoints over the city and its surroundings, from where you can enjoy constructions such as the Gothic convent of Sant Doménech surrounded by gardens, and Les Aligues, headquarters of the old university and that today hosts the Language & Arts campus and the Rectorate respectively.

A CATHEDRAL “WORTH A MOVIE” 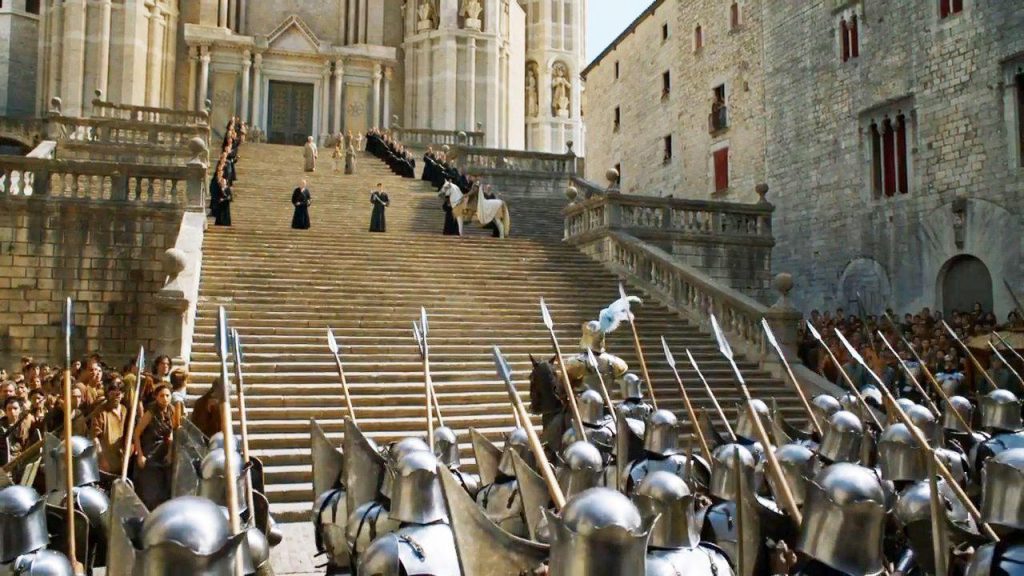 After the walk through the walls, we arrive at the cathedral, probably the most iconic construction of Girona. Its strategic location in the most genuine place of the Força Vella and its solid appearance reveal its Romanesque origin. The cathedral was built between the 11th and 18th centuries, so that the Gothic and even Baroque styles coexist on the facade and the staircase. A total of 90 steps distributed in three sections (the first of 33 steps, the intermediate of 28 and the last of 29); good thing they’re separated by two landings to get one’s breath back!

The stairs that give access to the Cathedral are often the scene of cultural and sporting events, in addition to having served as a filming set in well-known productions such as Game of Thrones. Here you can see more locations of the series that run through the streets of Girona. Watch out! if you haven’t seen the 6th season it can be a spoiler!

Girona also has other key pieces of religious architecture, such as the Benedictine monastery of Sant Pere de Galligants or the church of Sant Nicolau. These are two of the most representative Romanesque temples which are now a museum and an exhibition hall, so you can enjoy the most representative style of the Catalan Middle Age from outside and also enter to enjoy the works of art that its thick walls host.

THE CALL, THE JEWISH QUARTER OF GIRONA 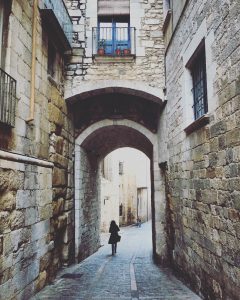 And back to ground level, we enter one of the most iconic and picturesque areas of the old town: a maze of narrow alleys and courtyards that take us back in time to the Middle Age. It is one of the best preserved Jewish quarters in the world and an obvious example of the importance of Jewish culture in Girona.

But we have already mentioned that Girona is historically a fusion of cultures, and this is perceived in every corner. For example, The Arab Baths located in a Romanesque-style Capuchin convent and built inspired by the ancient Roman baths. You can’t miss the entrance room, changing room and lounge, or the awesome dome laying on fine columns that crowns the central pool.

And after this bath of cultures, we propose you to cross the Onyar River, which separates the old town from modern Girona. You’ll be able to experience a new journey forward in time while enjoying one of the city’s most characteristic sights: the colorful Onyar Houses. 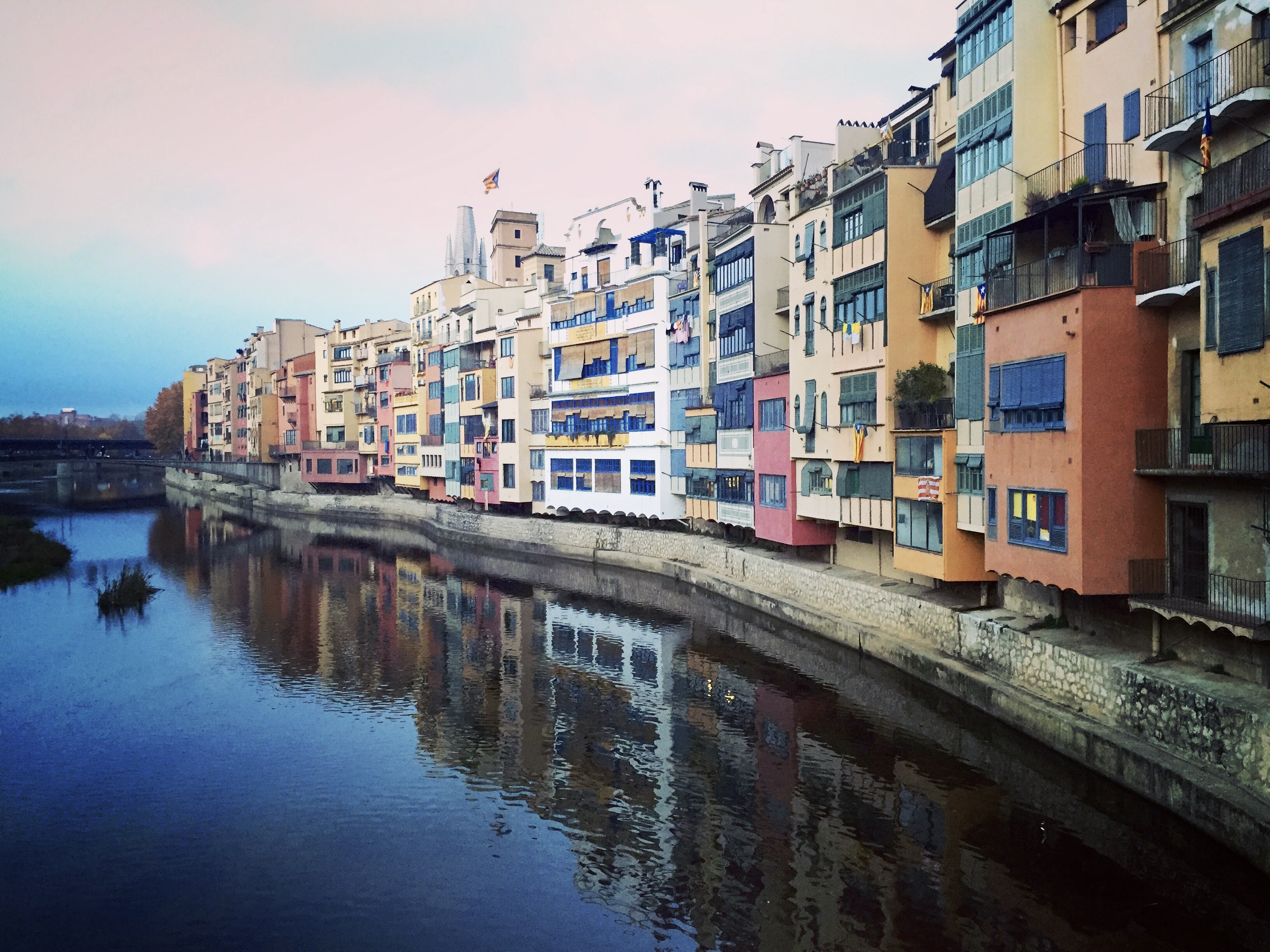 THE EPICENTER OF CATALAN GASTRONOMY

At Hostemplo we are big fans of gastronomy and we like to share everything we know about Catalan gastronomy. Well, we wouldn’t know where to start here!

Girona is with no doubt the epicenter of Catalan gastronomy and author cuisine. It is the province with the largest number of Michelin-starred restaurants in Spain, and probably in the world. And not only that, but in Girona we can also find the restaurant that many consider the best restaurant in the world: El Celler de Can Roca.” The sweet world, the liquid world, the world salty; Jordi, Josep, Joan. The kitchen, the dining room, the cellar; art, science, dialogue. Light, space, people; the object, the look, the moment.” The Roca brothers carry the passion for cooking in their blood; They grew up and played amid the hubbub of dishes, pots and pans and clients in Can Roca, the establishment their parents managed.

With renowned cooks so committed to cooking, avant-garde and outreach, it is no surprise that Girona is also one of the headquarters of the Fòrum gastronòmic, a pioneering and innovative event that brings together the most important and prestigious professionals in the world of gastronomy in Europe and that will celebrate its 20th edition in November. If you decide to attend the event, you may enjoy workshops, talks and contests of the sweetest, such as the one of “The best xuixo in the world”. Here you can find all the details about the biggest meeting for food professionals.

HOW TO GET TO GIRONA?

From Hostemplo it is very easy! Just two metro stops from Sagrada Familia you can take the train that will take you to Girona in just over an hour. And on the way back, after walking through walls, walking through alleys and enjoying the best of Catalan gastronomy, nothing better than a good rest in one of our rooms with terrace to relax and recover energy to continue your visit. Plus, remember that if you book through our website, you have free breakfast throughout your stay! 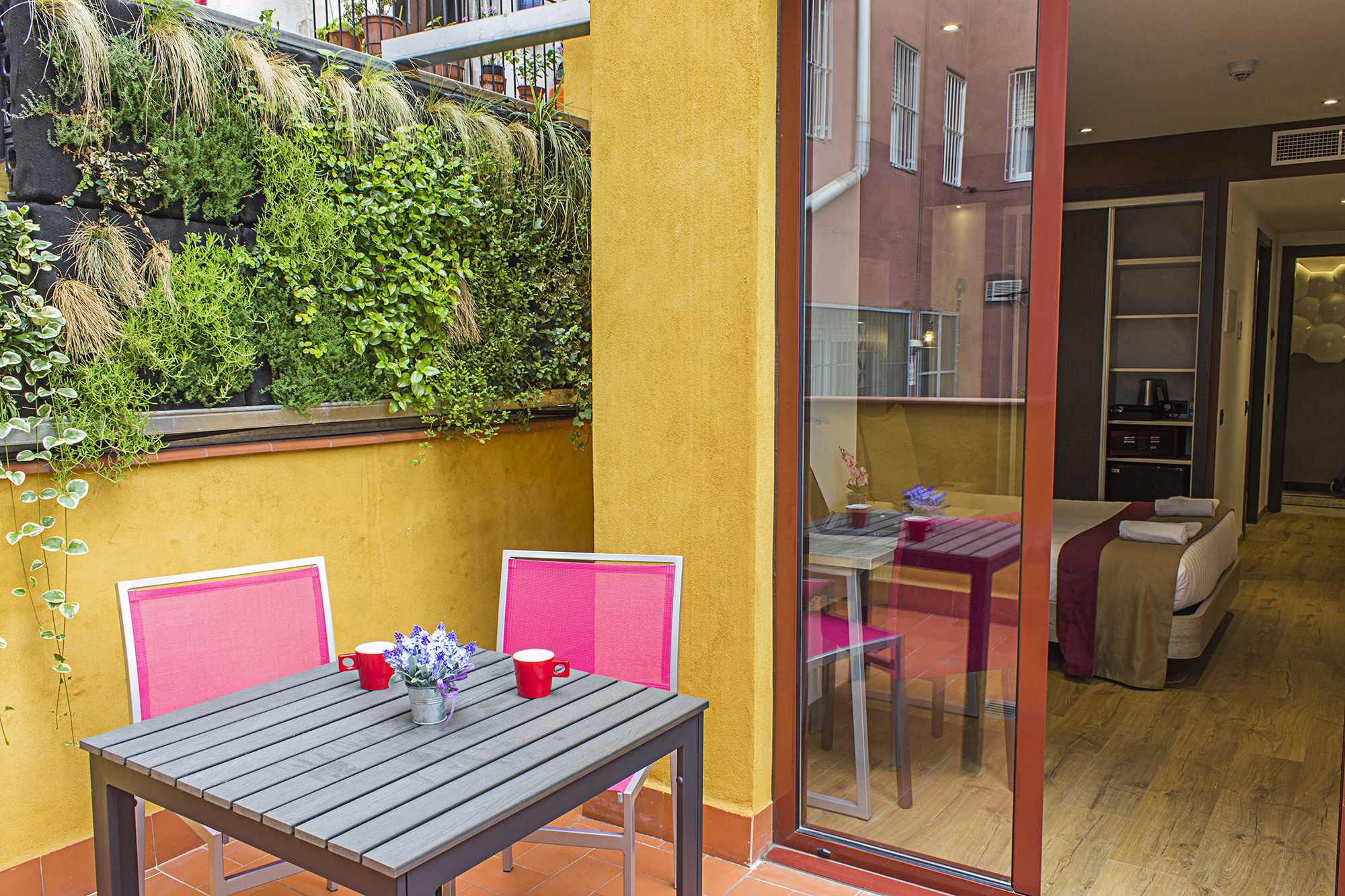